For a long time, Russian engineers thought that best CAD systems on the market are provided by foreign suppliers. It was widely believed that Russian CAD systems are only suitable for small simple projects, while complex high-tech products require high-end western CAD software. People said, that only foreign CAD systems allow working with very complex assemblies and creating a high quality geometrical shapes.

It probably was true a few years ago, when foreign CAD systems had no real competitors. But now the situation is different as the T-FLEX CAD 17 has been released.

The T-FLEX CAD 17 allows creating a high quality geometry, suitable for most complex project (see the article on our website). Besides, the T-FLEX CAD 17 achieves a comfortable performance, when working with assemblies consisting of hundreds of thousands (or even millions!) of parts on a simple almost gaming PC instead of expensive workstation.

You cant believe that?

Well, we wont just make some mere allegations. Lets test how fast the T-FLEX CAD 17 handles the assembly, consisting of 1.5 MILLIONS of parts!

Before testing we need to find the suitable assembly, consisting of 1.5 MILLIONS of parts! Moreover, we want parts to have complex shapes simple cubes are not enough. Well, lets use the Tilt-rotor aircraft (60 000 bodies) and the Business jet (49 000 bodies) models designed by our specialists. These models complexity and level of detail can be seen in two videos below.

These assemblies will be used as subassemblies in our demo model. 12 business jets and 16 tilt-rotor aircrafts are required to cross the mark of 1.5 million of bodies.

Here are our testbed PC specifications:

The process of testing is shown on the video below.

So, the video above demonstrates working with the assembly in the T-FLEX CAD 17 in real-time. Assembly consists of 1 555 778 bodies. Solids are fully loaded, i.e. its not just a simple polygonal mesh, but a fully-functional engineering model. 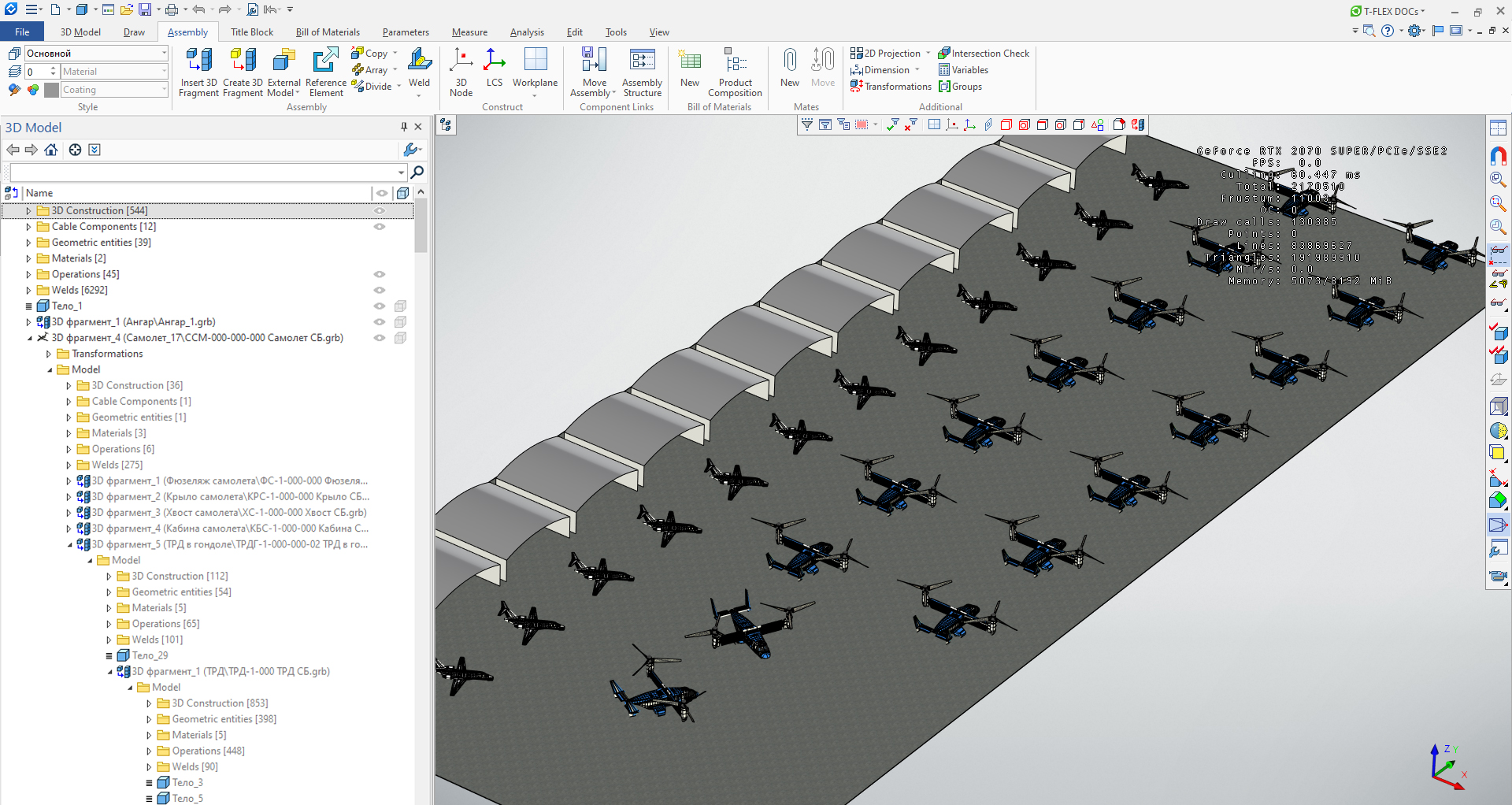 The video speaks for itself  the T-FLEX CAD 17 easily handles such complex assembly.

However, lets provide some comments on what exactly is going on in the video.

In the beginning of the video you can take a look at the number of bodies displayed in the Assembly Structure window and see that the assembly really consists of over 1.5 million bodies. The GPU model and FPS are displayed in the upper right corner of the 3D window. Bottom right corner of the screen contains a timer of video capturing software, which ensures that the video fairly demonstrates the whole testing process without any montage.

On the 30th second one of the assembly components (the single business jet) is displayed in the transparent visualization mode. As you can see, the model is fully detailed without any simplification.

On the 45th second you can see that elements of the assembly are editable  we change transparency and colour of some parts.

At the 1:15 timestamp we apply dynamic sections. Notice the dynamic highlighting of models faces and the fact that the section is shown with material  it is only possible if the model consists of solid geometry.

On the second minute we fully unfold the 3D model tree down to the lowest level of parts and operations. Notice that corresponding parts and sub-assemblies are highlighted in the 3D window, as we go down the tree. 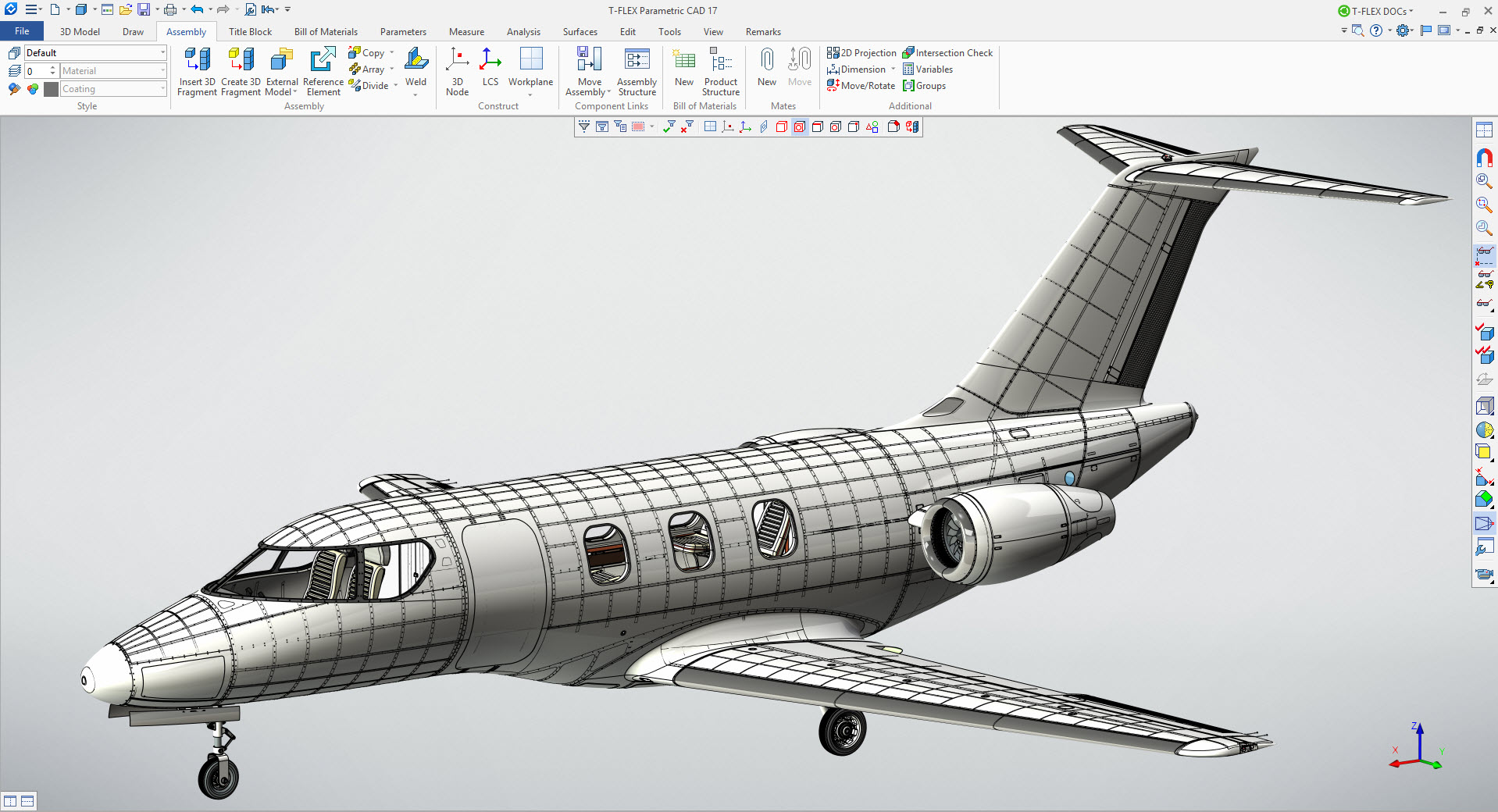 At 2:35 timestamp we show how quickly it takes to open the sub-assembly consisting of almost 50 000 parts. The whole process takes less than 10 seconds and the open assembly is displayed in the 3D window with about 60 FPS. 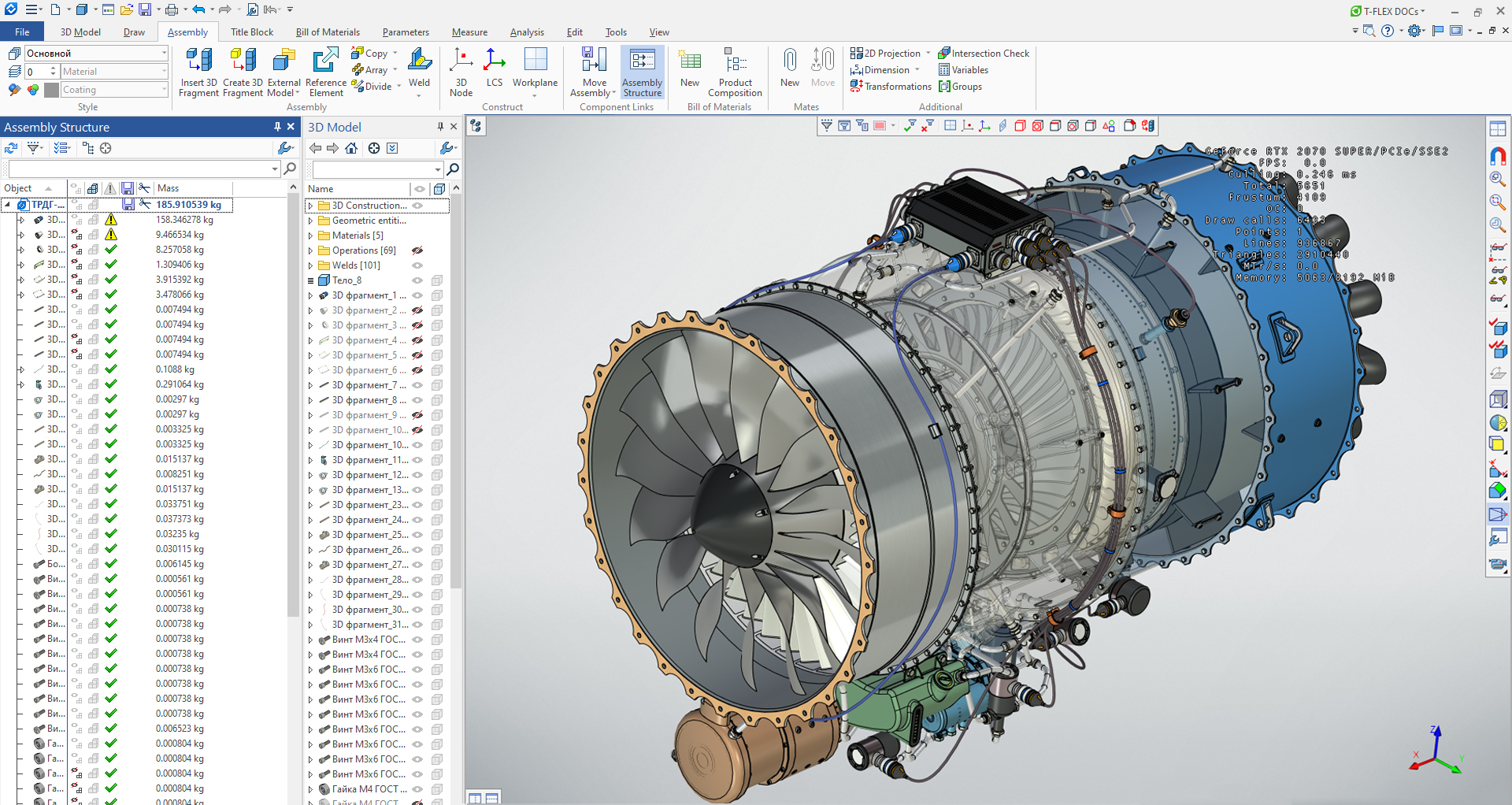 At fourth minute we go deeper into the model tree and show the turbojet engine model, which is one of the components of the assembly. You can see the complex shape of one of its parts. 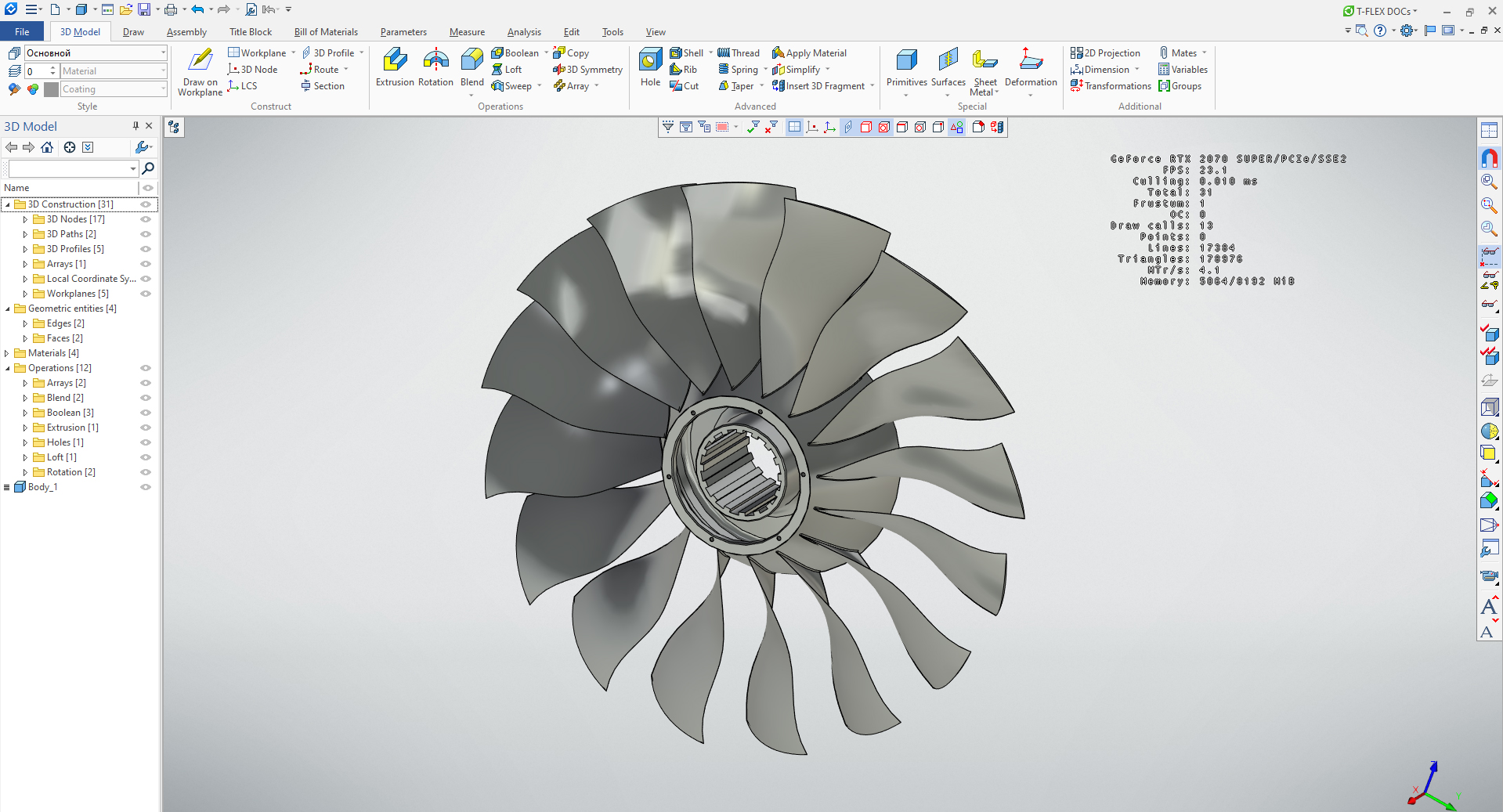 In the final part of the video we show real-time photorealistic capabilities of the T-FLEX CAD 17. Its beautiful! And thats working with an assembly, which consists of over 5000 bodies. 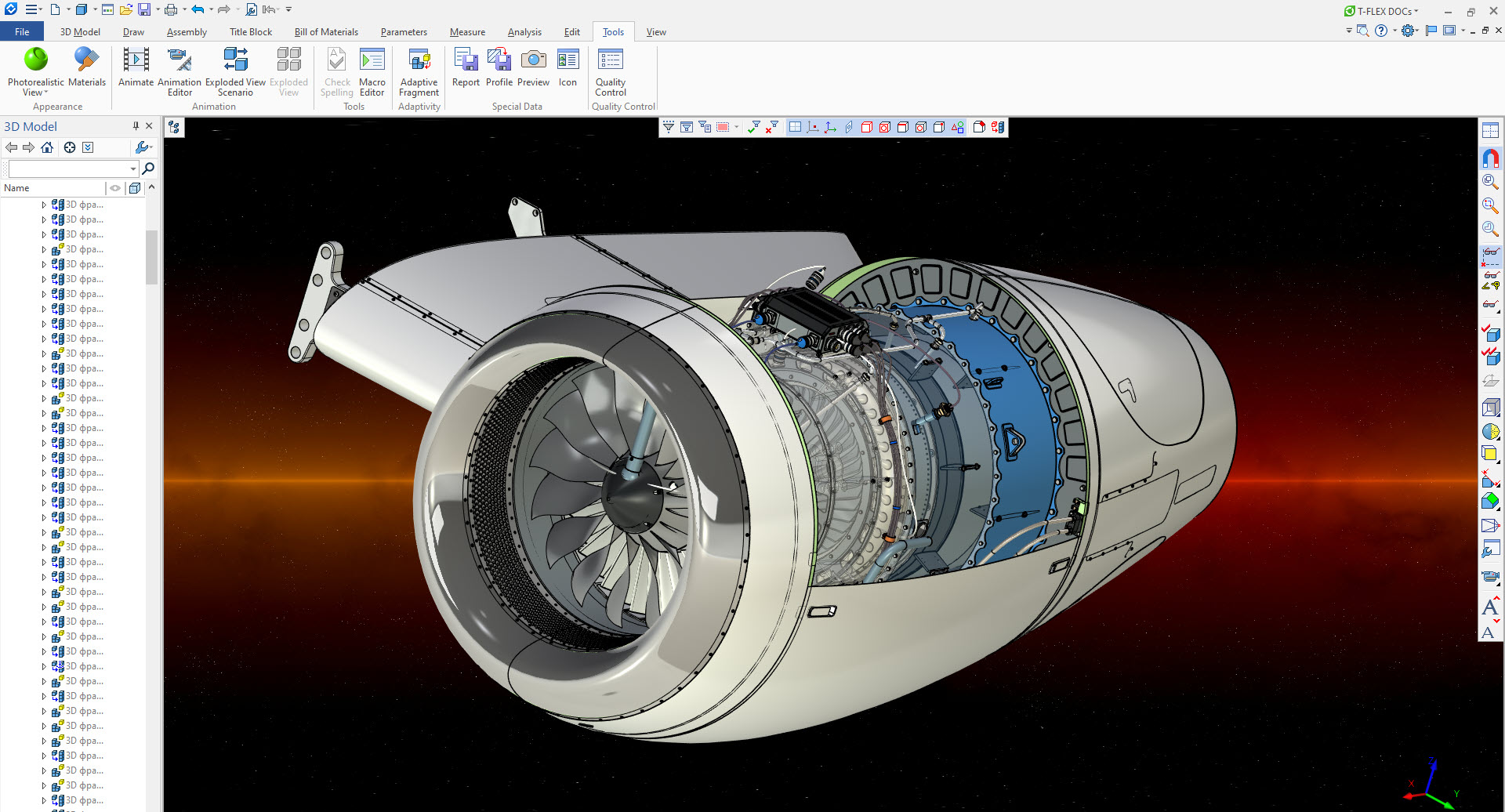 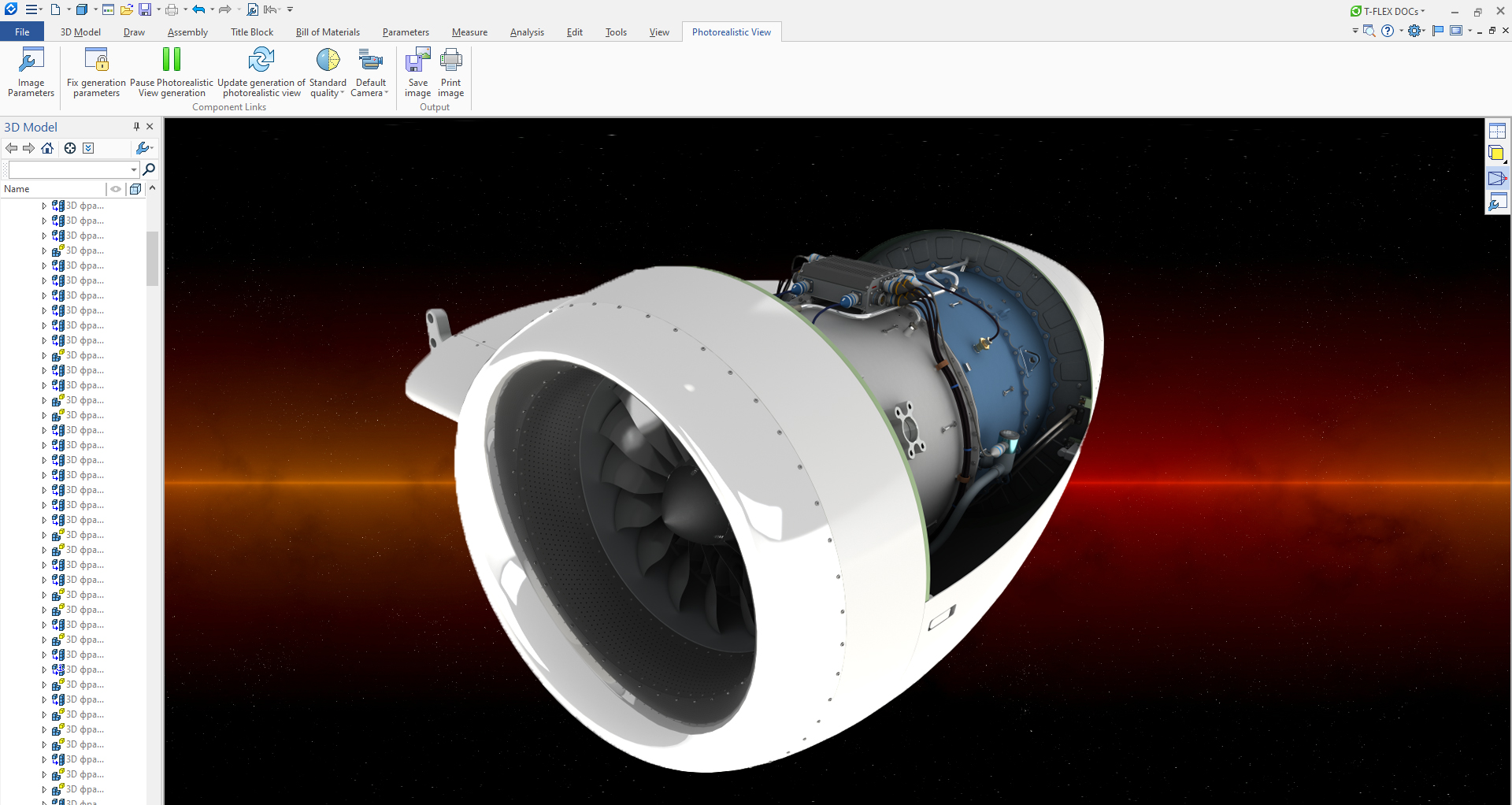 As you can see, the T-FLEX CAD 17 provides extremely high performance, which allows to work with most complex assemblies containing from tens of thousands up to over a million of bodies. Moreover, we in the Top Systems consider our T-FLEX CAD one of the most efficient CAD systems in the world.

Do you have any questions about presented testing? Were awaiting your comments to this article!